"IT JUST WANTS YOU"

Although, some communities are becoming infected with HIV at increasingly higher rates than others, HIV still remains a disease that is indiscriminate of race, class, religion, sexual orientation and gender. As one participant in the AIM program put it, “it just wants you.” The Choice Is Yours: Voices from Dorm E, is a magazine that serves as an outlet for inmate mothers that are HIV positive, to provide guidance and outreach on dealing with HIV/AIDS and real-life suggestions for its prevention. 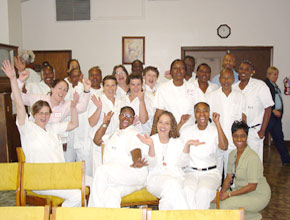 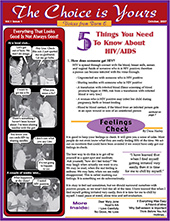 THE CHOICE IS YOURS

The Choice Is Yours magazine features artwork, stories, advice, fotonovelas and poetry conveying the importance of self-esteem and the advocacy of self-responsibility. This project was a collaboration with the Aid to Inmate Mothers program (AIM), at Tutwiler Prison (a division of the Alabama Department of Corrections) and the RWHP. The messages of these women, developed through self-reflection on their personal struggles with the disease and substance abuse, share their optimistic plans to make a positive impact despite their physical and social conditions.

Click here to view "The Choice is Yours" magazine. You can order copies of the magazine from our product catalog.

Click through this slideshow to learn what HIV positive females want to share with others about their experiences as inmates in prison.

Click through the slideshow above to see what these inmates see when they close their eyes and dream of a better day.

"The collaboration was wonderful. It was special to the women that they had a product that included their names, their pictures and their ideas and because they were able to see that their thoughts counted."

"After the project, the morale of the women inside the prison went up because they felt that someone cared about what they had to say, they felt that their voice was important and that they were capable of producing something valuable."

5,000 copies of The Choice is Yours have been printed and will be distributed during orientation for new inmates throughout the Alabama Corrections System. Let us know if you are interested in using these materials in your work!

This project was created from a collaboration of AIM, Alabama Department of Corrections and the Rural Women’s Health Project, funded by the Southern HIV/AIDS Prevention Initiative, Pfizer, Inc.