The fotonovela is arguably the RWHP’s most effective tool. For almost 30 years, the RWHP has molded the fotonovela into a tool of reflection, role modeling and empowerment.

“RWHP fotonovelas reflect the struggles of communities in a positive light, incorporating role models who balance socio-cultural obstacles and disease prevention. The visual aspects of the novela are enticing and the style allows the reader to explore the health topics, increase self-identification and risk, and strengthen cultural identity.”[1]

The RWHP’s fotonovelas are developed with the community they are intended to serve. With the RWHP’s use of community actors and the message-specific storyline for the target community, the fotonovelas successfully present health messages, document the work of communities and unify them to both improve individual and community well-being.  The minimal text, popular language, and visuals of the fotonovelas allow them to be read easily across literacy levels. These elements make fotonovelas an excellent educational tool for outreach workers, youth and discussion groups. 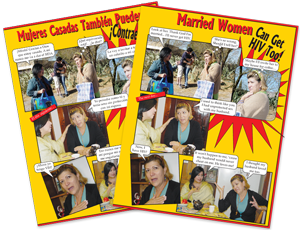 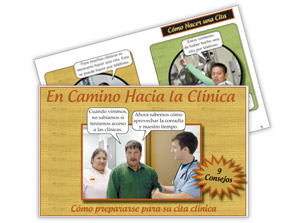 The fotonovela is a traditional print medium found in Mexico, Latin America and the Caribbean. Fotonovela, also known as novelas or novelitas, are similar in format to that of a comic book. However, rather than illustrations, sequential photographs are used accompanied by dialogue bubbles. Fotonovelas typically depict a simple, dramatic story (or soap opera) enveloped in a dramatic plot that contains a moral message.

Initially produced in Italy and Spain, fotonovela were tactile representations of the movie with which they correlated (Carrillo, 1983). The documented history of the fotonovela is varied, although the Hispanic/Latino fotonovela dates back to the early 1940’s in correlation with the rise in the popularity of film.

Eventually, Latin American countries began developing fotonovela that featured original stories that were not based on cinema productions. By the 1960’s, approximately 23 movies were featured in the fotonovela format and nearly three times as many fotonovela with original content were circulating throughout Mexico, Central and South America (Carrillo & Thomas, 1983). Toward the late 1980’s, Mexico was publishing approximately 70 million fotonovelas per month (Herner, 1979). In recent decades fotonovela production has declined, although some classic fotonovelas are being reprinted and new fotonovelas are still in development. 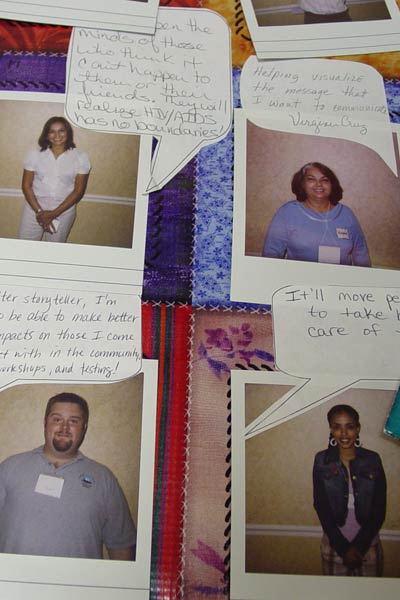 The Fotonovela as an Educational Tool

A major challenge in the area of health education and behavior intervention is reaching persons with low literacy skills, as well as language or cross-cultural communication barriers. An innovative, effective approach for health care workers to reach this population and change behaviors is through the use of the fotonovela.[1]

The fotonovela places concepts in a relevant context and offers powerful role models. In terms of literacy, it offers greater readability and comprehension. Additionally, the integration of learners into project development increases the cultural appropriateness and sensitivity of the message and offers the flexibility to introduce socio-cultural issues.

The RWHP uses the novela format because it is an excellent educational tool. It has proven to be a successful means of communicating health information and other social issues that are indirectly health related.[2] The fotonovela published by the RWHP have gone through an acculturation process; in community work, the fotonovela has evolved from a form of entertainment in its countries of origin into a medium that presents health messages and serves as a tool of community affirmation. All fotonovelas developed by the RWHP incorporate four keys concepts:

Fotonovelas are very versatile educational tools. The fotonovelas developed by the RWHP are designed to reflect the target audience by presenting realistic role models and realistic options.

You can use fotonovelas to …

How to decide how to use your fotonovela materials?

Not all fotonovelas are equal—you will want to review both the content and style of each novela. Some novelas are useful for introducing a health message or for general awareness; others might be great as part of a health meeting, and some will serve as a means to explain protocols or behaviors.

You will first want to review the material’s appropriateness for content, audience and story ending. Then ask yourself, “Does the material suggest actions that require support in order to accomplish the suggested behavior or action, or is the message self-manageable?”

Fotonovelas can serve to raise awareness about a topic or to compliment a larger campaign. Materials with a general topic are fine for mass distribution as well as for outreach by your staff. These materials can be distributed at:

Open-ended stories are best utilized by a lay-health worker, nurse or health educator; someone who can use the story to reiterate face-to-face education or to complement a medical recommendation. This type of fotonovela can also be used in a group setting, where discussion can focus on outcomes or behaviors.

Materials addressing intimate topics such as condom use or breast self-exams are best used in combination with direct education. They can be used to reiterate or summarize proper steps for healthy outcomes. 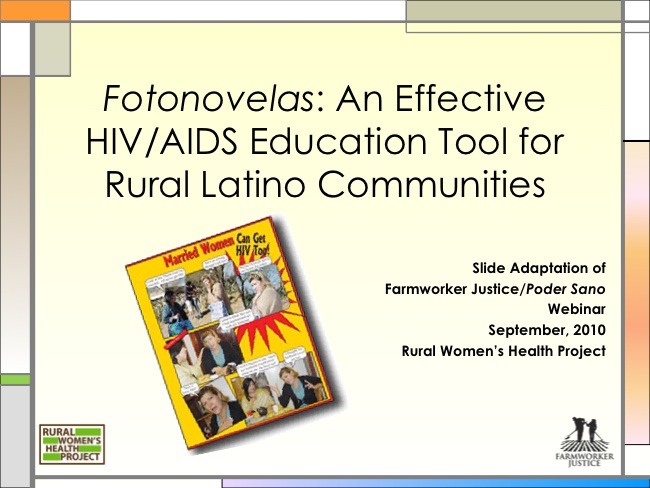 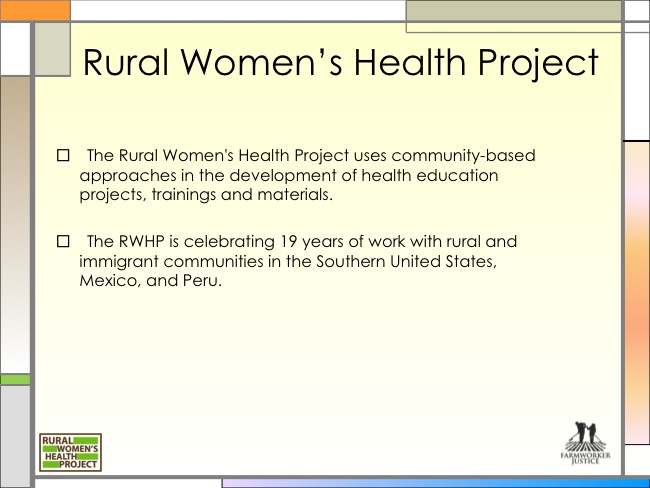 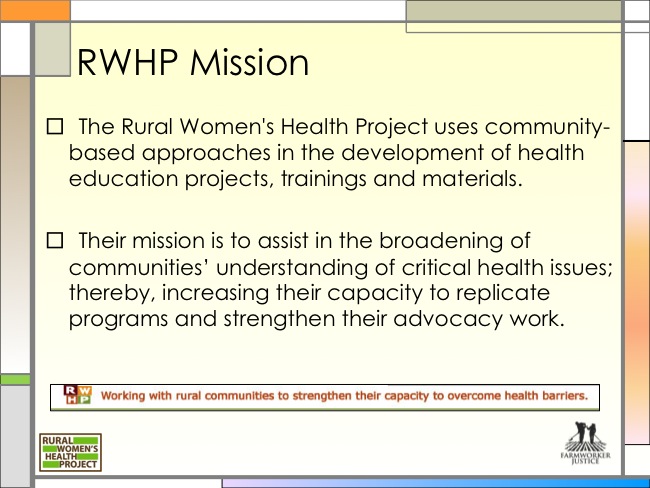 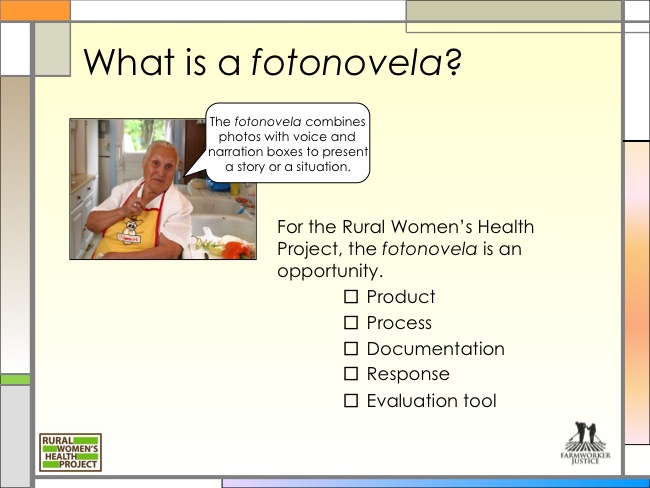 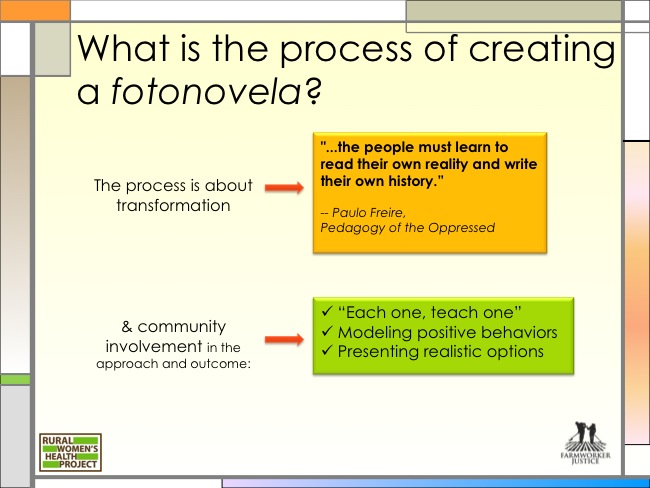 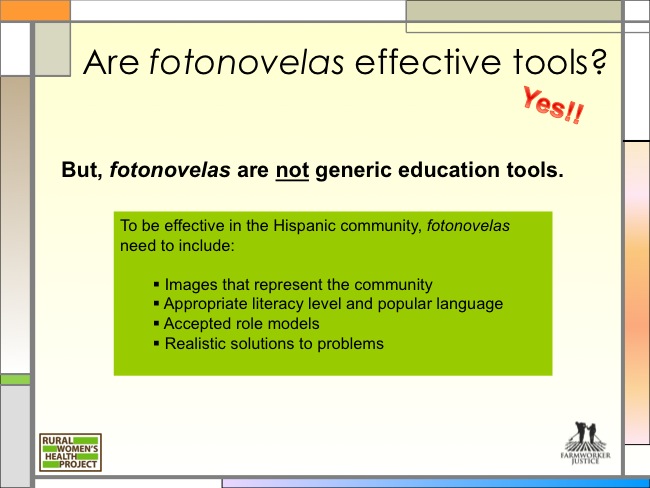 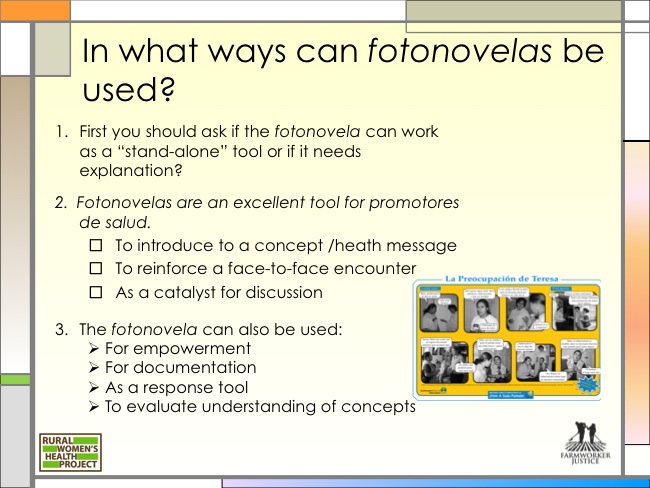 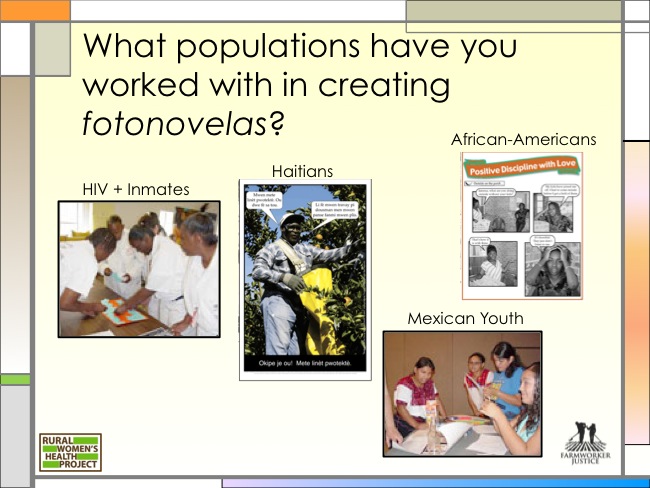 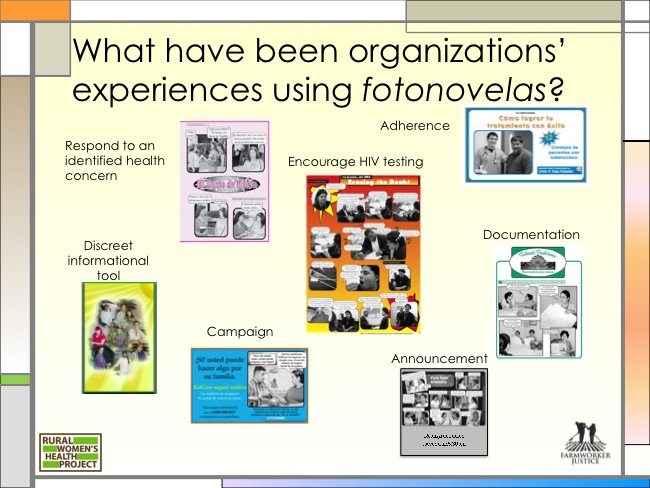 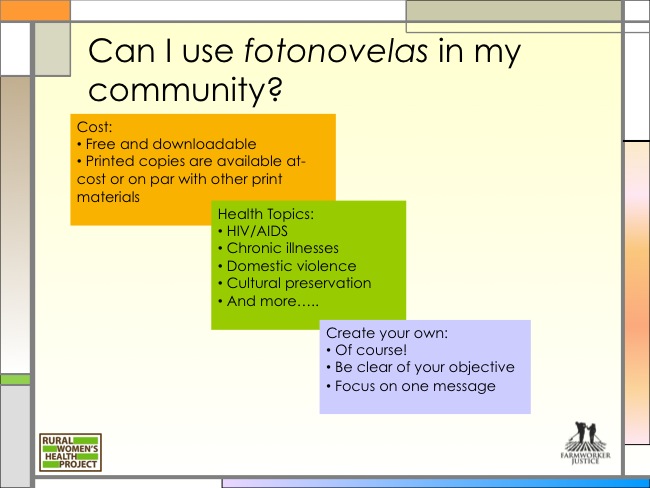 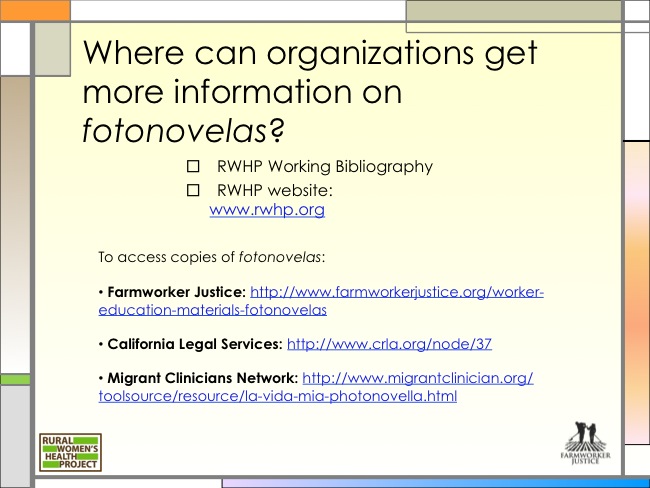 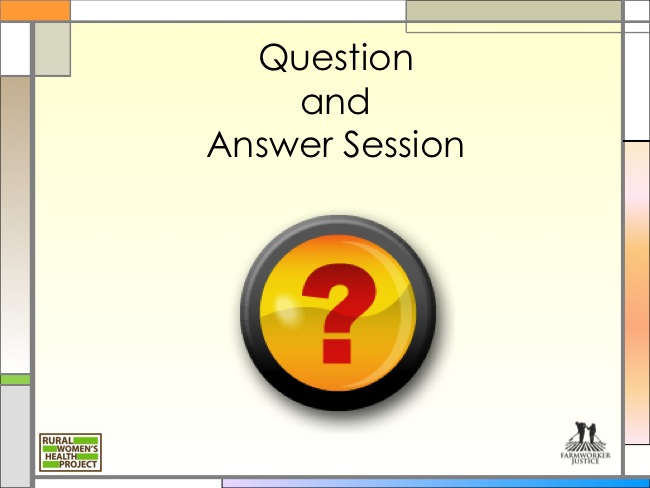 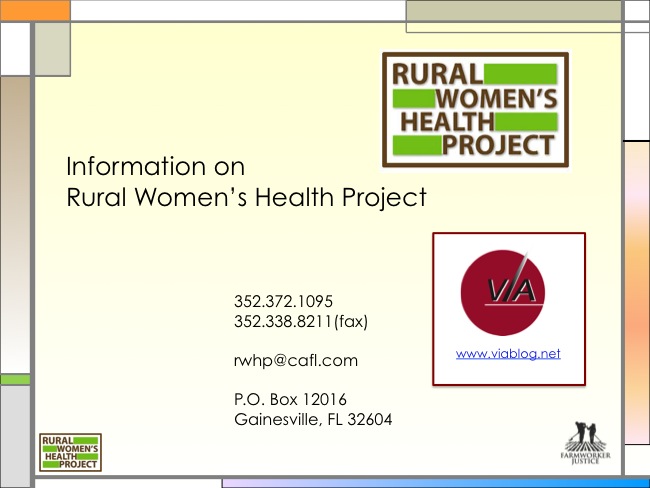 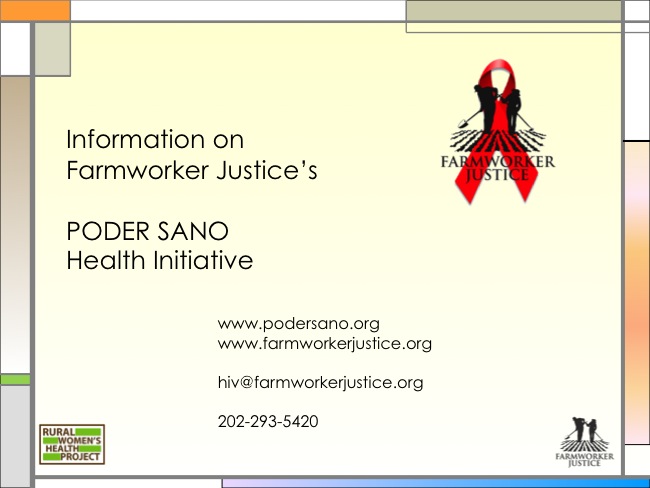 The Fotonovela as an Outreach Tool

The fotonovela is an affordable tool that can be utilized by health outreach workers, community organizations and professionals. However, because RWHP fotonovelas are visually unique and include all key information within the storyline, they can also serve as a useful tool to reach individuals who have not yet come in contact with outreach workers or traditional services.

Therefore, the fotonovela can also be distributed at non-traditional locations such as laundromats, corner stores, health fairs, through church programs and still serve as a source of information for the community.

Sources for more information about fotonovelas